Located 3h30 by train or 1h15 by flight from Brussels, Lyon is an open, cosmopolitan city with an exceptional architectural heritage... perfect for a romantic weekend.

Lyon, a city crossed by two rivers: the Rhone and the Saône, immediately takes on a particular attraction, that of the banks and the quays, of walks, of daydreams on the terrace, of cruises... Strolling through the historic site of Lyon is like strolling through time, from 43 BC to the present day, to be exact! Elected the second most trendy city in France (after Nice) in 2022, the people of Lyon enjoy a gentle way of life similar to ours.

View on the old Lyon, the Saône and the Fourvière hill © DR

Throughout this weekend, we will stay between the two rivers in the1st,2nd and4th districts of the city and will regularly cross the Saône. Whether you prefer the metro, tramway, bus, scooters, bikes, on foot, etc. Lyon has made itself easy and accessible for everyone.

After your trip and a short stop in your hotel* or airbnb to drop off your luggage, you immediately go back down to the streets! Lyon is a city similar to Paris: you just walk around, your nose in the air, your eyes riveted on its architecture, a mix of past heritages and contemporary creations. 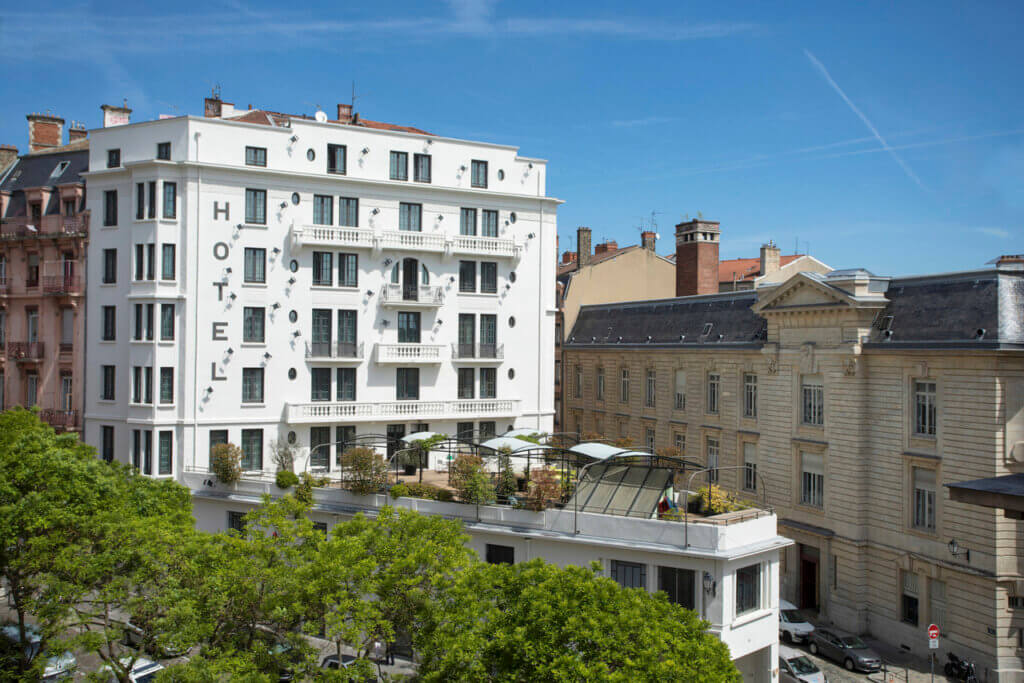 A creation by Pablo Reinoso for the Collège Hôtel on its façade gives a taste of the surprising theme that awaits you inside. DR

*A good address: The College In the Old Lyon district, a 4-star hotel combining design and nostalgia on the theme of school in a back to school atmosphere. 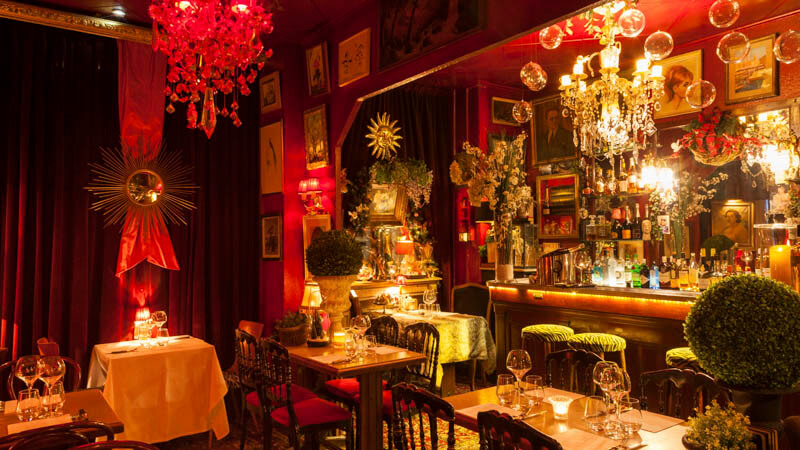 The whimsical setting is charged with the history of the place and decorated with unusual objects, found over the last 20 years. DR

Tonight, I take you for a romantic dinner at Demoiselles de Rochefort which is located 15 minutes walk from the hotel Le Collège. Olivier Fontaine, the owner and chef, has always had at heart to propose a cuisine of fresh products, without superfluous pretense, but creative and tasty where olive oil and fresh herbs testify to his taste for the south of France. Book HERE.

For those who would like to have a last drink or go dancing, I recommend the Baràgones*, a cocktail bar and premium spirits immersed in an atmosphere of South America and the Caribbean in honor of the Dia des Muertes. The good thing is that it is located next to the hotel Le Collège.

*A subtle play on words with the term gones which means 'kid from Lyon'. 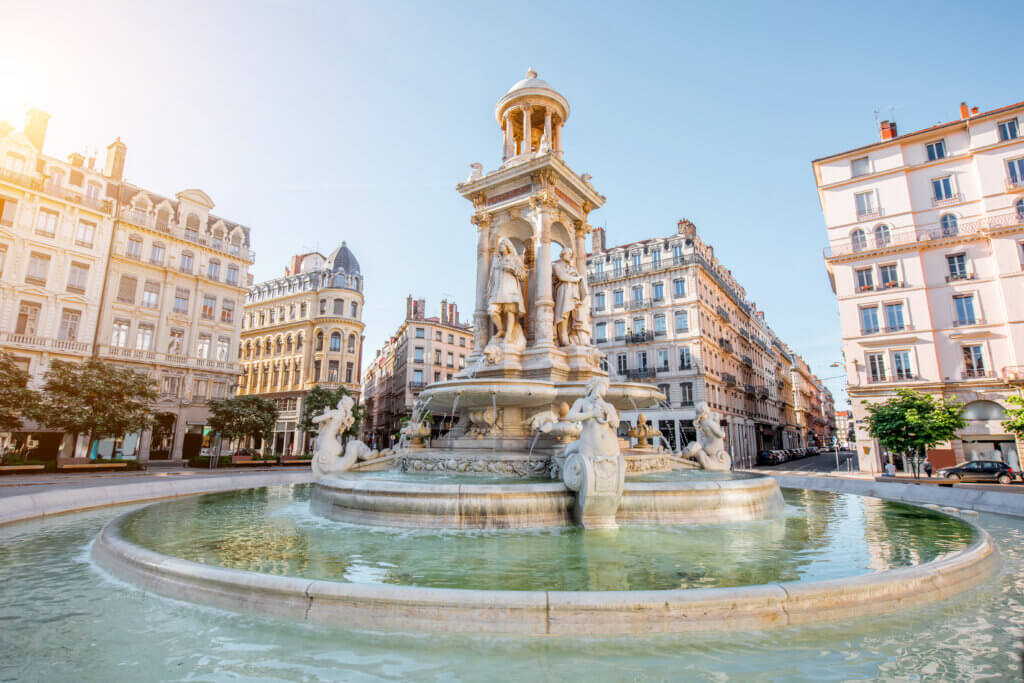 This morning, we walk around the place Bellecour to make the boutiques. If there is a paradise of fashion in Lyon, it is well in the golden triangle between Bellecour, Cordeliers and Jacobins. Indeed, several brands, department stores and trendy stores have been established in these posh neighborhoods. Some small stores to visit:

For lunch, I recommend the terrace of Funky Monky which offers a nice view on the Passerelle du Palais de Justice and the Basilique Notre-Dame de Fourvière. You can taste delicious burgers, like the FunkyBurger (Bun's brioche bread, fresh Charolais minced steak, Monky sauce, tomatoes, pickles, candied onions). Or the Monky Wild (Brioche bun, homemade tartar sauce, Rösti, vegetables of the moment, vegetable steak). On the side, fresh fries with Funky sauce (cheddar, bacon, onion). The plus: Funky Monky is the very first beer bar in the city with a permanent happy hour, in partnership with Chouffe.

A small digestive stroll on the quays of the Saône to bring back your shopping to your hotel, to refresh you and to dress elegantly because this evening, we dine in restaurant 1 Michelin star and 1 green Michelin star.

Then, I propose you two options to go to the Basilica Notre-Dame de Fourvière:

After this (very) sloping rise, we arrive in front of the magnificent Basilica of Notre-Dame de Fourvièrethe work of the architects Bossan and Sainte-Marie Perrin. It was built in 1870 on the site of the old forum of Trajan, Forum vetus (the most likely etymological hypothesis for the current name of Fourvière). Consecrated in 1896, the basilica is dedicated to the Virgin Mary . The high church is dominated by three domes and illuminated by six stained glass windows that offer a light highlighting a rich decor. The materials used for the construction and decoration compete in quality and beauty, white marble from Carrara, pink granite from Northern Italy, blue marble fromSavoy, green onyx, flashes ofsilver andgold, marriage ofebony andivory. Classified as a historical monument, it is part of the Lyon site listed as aUNESCO World Heritage Site. 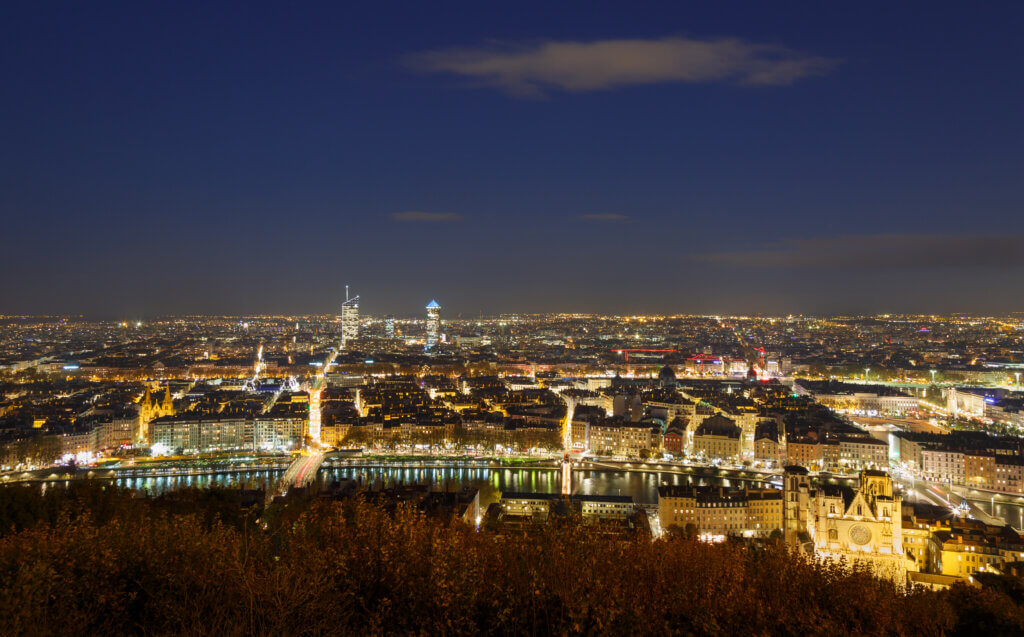 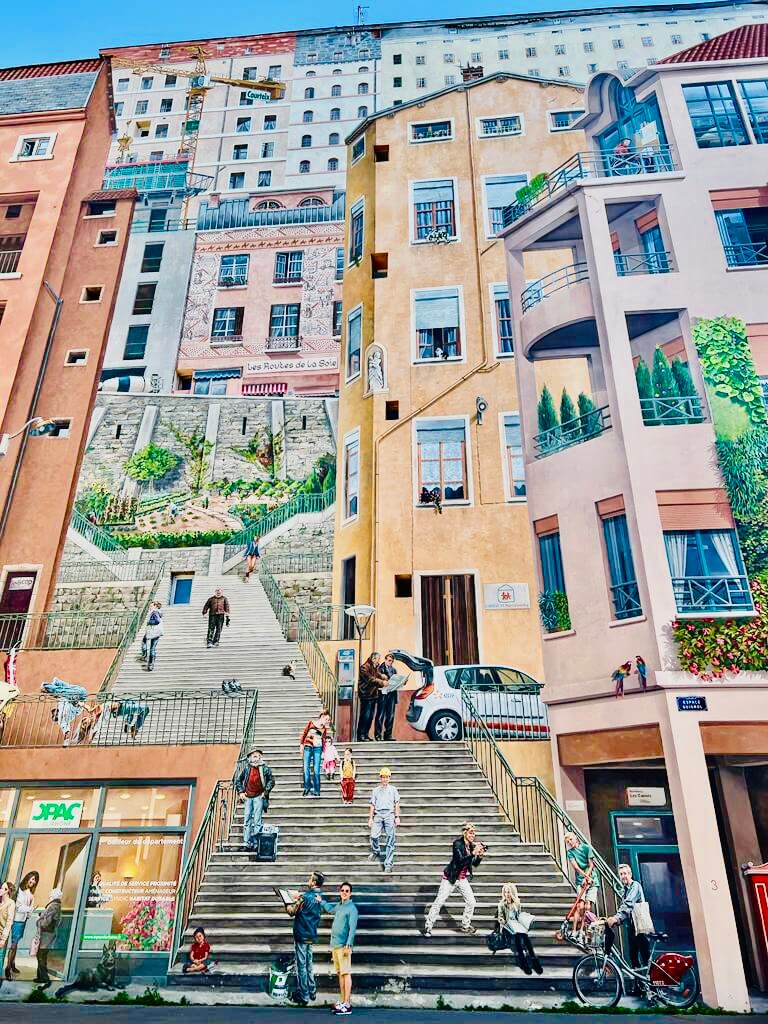 Today will be a cultural day. We will stay around the Place des Terreaux and start with two very instagrammables'. : 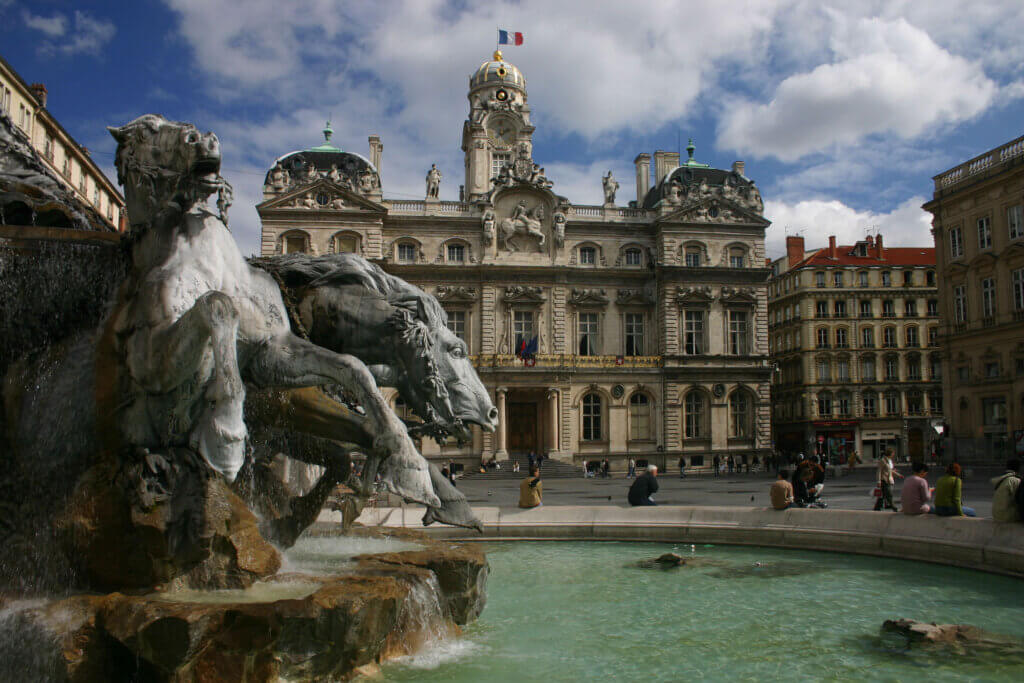 I suggest you then head towards the Place des Terreaux lined by two emblematic monuments of the city, the City Hall and the Museum of Fine Arts. In the center of the square is the impressive Bartholdi fountain, inaugurated in 1892 and realized by the sculptor Frédéric Auguste Bartholdi, author of the Statue of Liberty in New York.

For the continuation, visit of the Museum of Fine Arts of Lyon, considered as the most important museum of France after the Louvre.
It contains : 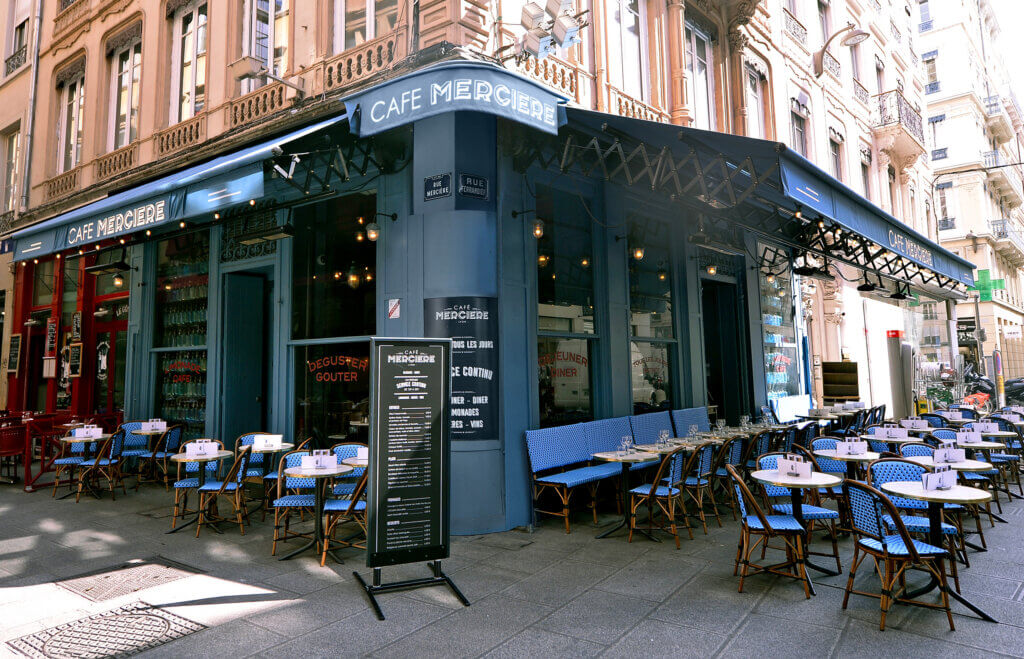 The Mercière café, a tested and approved address. DR

For lunch, I suggest you to choose among the typical Lyonnais bistrots of the rue Mercière called 'bouchons lyonnais'. Why 'bouchons' ? In the past, the cabaretiers used to hang a bundle of branches on the door of their establishment called bousche in the Lyon dialect. It was at the time a place of male reunion for the bourgeois, the heads of workshops, the workmen called the canuts.

All that's left is to wish you a good weekend in Lyon!

Article written by Camille Misson, published on Eventail.be. Find other articles on the art and culture market, but also on the gotha, gastronomy, fashion and health, decoration and heritage and entrepreneurship on www.eventail.be. 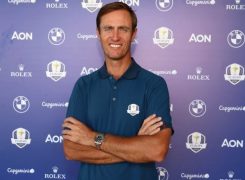 Nicolas Colsaerts has been named vice-captain of the Ryder Cup. Ryder Cup 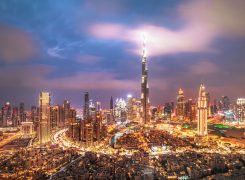 Dubai or how to practice the city of excess 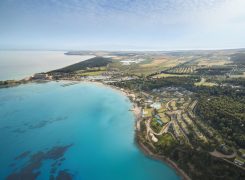 Sani Resort an summit, as a sustainable family resort 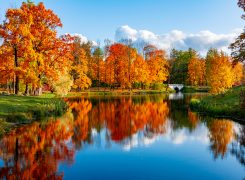 The most beautiful autumn landscapes